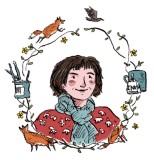 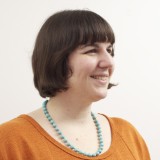 Kathleen is a writer and illustrator based in Brisbane, but she was raised on fairy tales in western Queensland. Her thoughts (but mostly her art) appear at https://tanaudel.wordpress.com/ . Kathleen’s stories are rich with the wonders and delights of the fairy tale world. Her interview comes coupled with some of her whimsical illustrations – all inspired by the world of fairy tales, of course!

1. The term ‘fairy tale’ can conjure up clichéd images of ‘happy ever afters’ and thanks to Andrew Lang’s ‘Coloured Fairy Books’ Victorian tales for children told before bedtime. In your experience as a reader and writer, what is a fairy tale?

For me, a fairy tale is a story that takes place within a certain set of rules. There is a logic to fairy tales by which you can recognize them, a core at which it is inevitable and obvious that a polar bear should turn out to be a Princess of Arabia, or a giant's hair have certain powers. They suit as bedtime and fireside stories because the framework is not always dissimilar from dream-logic (and has certain connections to jurisprudential theory, too).

Old folktales and marchen are part of that, and so are original literary tales that have learned the verbal or visual lilt of the language of fairy tales. It's a spectrum, of course. There are novels which keep the trappings but use a different logic, and vice versa. They're in that galaxy of fairy tales, somewhere along an outer spiral arm.

Neil Gaiman's Instructions captures some of that law/lore explicitly, but so does Shaun Tan's Rules for Summer: the stories in Tan's world are unfamiliar but the reasoning process is that same (and remember: never leave a single red sock on the line).

The fairytale-telling card game Once Upon A Time has a rule that players can object to a round on the basis it is ridiculous. I love this, because I mean, it's fairy tales, by ordinary standards everything is ridiculous. Yet there's a category of odd things that simply feel correct in a fairy tale context.

2. Writers such as Angela Carter have written retellings of fairy tales set in contemporary worlds. In your retellings or re-imaginings how important is it to keep the original content? How important is divergence to you? Or is this something that is discovered through the writing process and unique to each story?

And it depends on the writer's intention: is it a strict retelling, a psychological investigation, a synthesis of variant traditions, a forcible imposition of one story on another...?

On some level, if you've studied enough literary theory, or are just contrary, you can argue almost any story is a variation on another. A recent story of mine ("The Wolves of Thornfield Hall: A Variation on a Theme" in Eleven Eleven Journal #19) is a deliberately inaccurate reading of Jane Eyre as a conscious retelling with Rochester as Little Red Riding Hood (although I started convincing myself partway through – Rochester does wear a red cape at one point).

3. Sometimes writers work with the bones of fairy tales to write new tales. When ‘working the bones’, do you find that the original tales act as scaffolds, metaphors or symbols for your new tale?

All of the above! I like to take tales, separate them into their elements and then force them together. Putting two stories together wrong can break all sorts of ideas open.

We played a game like this over dinner at Illuxcon a few years back: pick two fairy tales and combine them to come up with an illustration topic. People had BEAUTIFUL ideas. And I've sat with friends and made up our own element cards during coffee and used them to tell stories.

But I have also drafted stories without a fairy tale kernel and, when struggling with the logic or the emotional arc, gone back and battened them onto an existing fairy tale. I did this with "Skull & Hyssop" (Lady Churchill's Rosebud Wristlet #31), which is steampunk-ish. I had written the story but it lacked... something. So I distilled the plot, then distilled those of several fairy tales until I found one which matched pleasingly. I used it as a diagnosis and scaffold, and also a reference for motifs.

There's a very visual language of motifs in fairy tales, which also opens the door to that land of fairy tale logic. A sense of the sublime as well as of horror, the power and co-existence of the domestic with the fantastic. They are elements I love to play with in my illustration as well as writing. Put a wolf in it.

4. Can you tell us about a favourite fairy tale you have worked with for one of your stories? Was it a retelling or a re-imagining or a new story with the skeletons of past tales?

I really like "Seven Ravens" and its related tales, but also the ballad of "Tam Lin": the girl who goes out and rescues the enchanted boy (often her brother, but "East of the Sun, West of the Moon"/"Beauty and the Beast" belong to this type of tale as well). It's a beautiful, practical, active group of fairy tales, and it's why I'm quite cool with damsel-in-distress stories, because I think they're more than balanced by the other. We can have stars and swans and knitting and dresses AND brave lassies being witty and clever, competent and strong AT THE SAME TIME. And there are enough motifs in them to splice them onto other stories easily.

"Seven Ravens" was the splint for "Skull & Hyssop", while the rose connection between "Tam Lin" and "Sleeping Beauty" opened the door into "A Hedge of Yellow Roses" (in Hear Me Roar, Ticonderoga Publications). And a larger project I am working on springs from Tam Lin/Robin Hood rootstock, with branches from half a dozen other tales grafted on.

5. If you could invite three fairy tale characters to dinner, who would it be? And why?

Little Red Riding Hood, the version who made Dickens fall in love with her, and who ran across the river on the sheets held by the washerwomen. Puss in Boots, for telling such dreadful lies. And one of the foolish sons: the ones who win the princess by being kind to all creatures, or happiness by being grateful for misfortune. (I love reading about the brave lassies and Tam Lin's Janet, but I think they would be exhaustinglpragmatic in company). 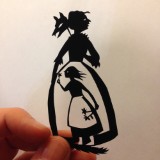